Over the summer months the lawn in my garden contained a number of small ants nests just below the surface. These were the nests of tiny Yellow Meadow Ants (smaller even than the more common Black Ant) and often mistakenly called red ants. Unfortunately, since the nests were often located below the surface, whenever I cut the grass I tended to expose the top of the nest and, on occasions, revealed the small pill-shaped pupae. These pupae are the 3rd stage of the 4 stage lifecycle of an ant, with eggs and larvae being the first two stages. The 4th stage occurs when the adult ants emerge from these pupae.

As soon as the pupae were exposed, the tiny worker ants, whose job it is to look after the nest and keep it tidy, would scuttle around collecting the pupae in their jaws. They would then take them to safety below ground.

I was keen to capture this behaviour but had to be quick because the ants barely paused for a second. Their tiny size (2-3mm in length) only added to the difficulty. The 2 images below are probably the best that I managed. 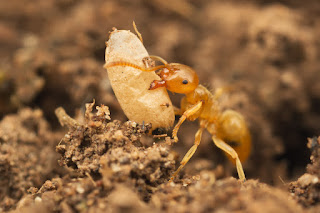 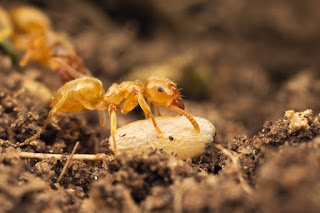