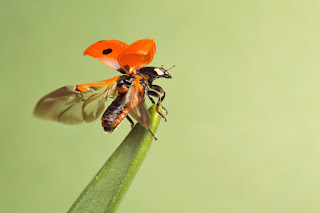 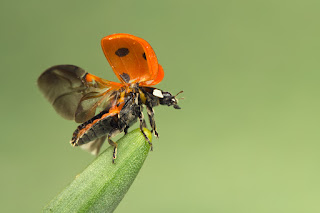 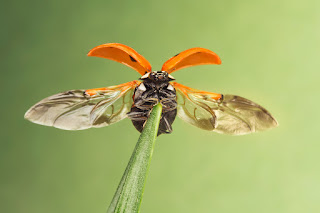 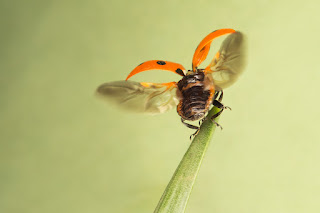 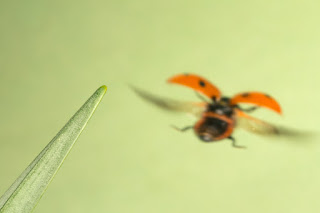 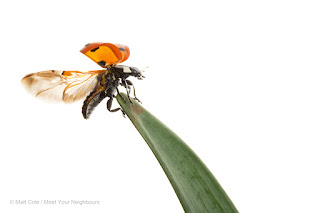 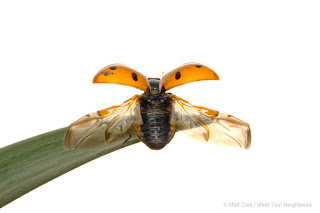 A few days ago I received the International Garden Photographer of the Year 2012 book which features my 'Confused Grasshopper' image (see this post). I have to say I'm very impressed with the book, it really is very nice. It contains some excellent images and the print quality is of a very high standard.

(note the image on the cover was not taken by me) 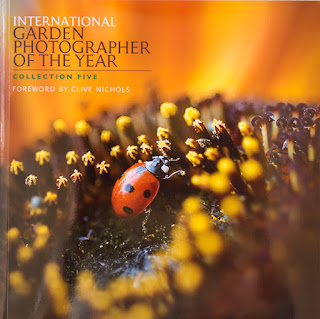 I'm very pleased to see my image given a page all to itself. 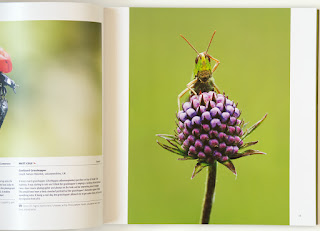 and it was also nice to see that my image forms a fold-out inside back cover: 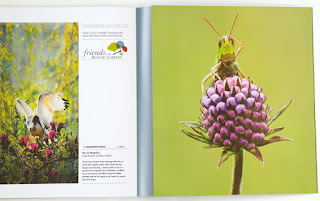 Finally, my image is also being used on the fliers to advertise next year's IGPOTY competition:

Further to my last post, here is yet more evidence that spring is in the air. This mating pair of Common Frogs (Rana temporaria) were recently found in my garden. What's a little confusing is the fact that there is no pond in my garden or in my immediate neighbours' garden, with the nearest being 2 or 3 gardens away. I realise frogs do wander from ponds but my understanding was that frogs mate in water with the male fertilising the female's eggs as she releases them. This male was firmly gripping onto the female as she crawled around my garden, perhaps he was trying to steer her back to a pond :) 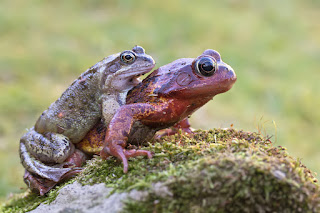 What I also found interesting was the considerable size difference between the male and the female and also the impressive red colouring of the female. 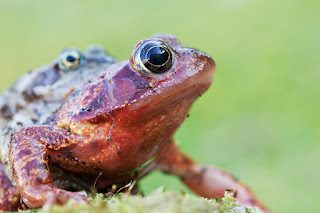 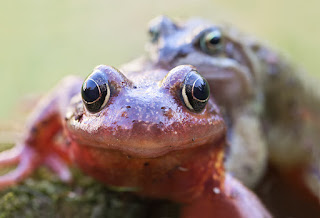 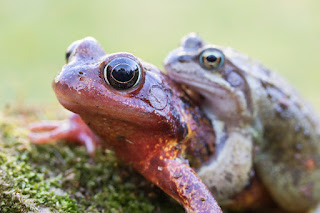 As an aside, I took these images using my back-up body which is a Canon 60D (with a 60mm macro lens). Since I had to shoot these handheld and because the light was failing I raised the ISO to 1000 to get a high enough shutter speed for sharp images. However I was very impressed with the resultant image quality which shows relatively little sign of noise. I did get the exposure about right which certainly helps to reduce noise but in future I won't be too concerned about raising the ISO on this body in order to get sharp images.
Posted by Matt Cole at 20:54 No comments:

Spring is in the Air

My garden is now full of the signs of spring thanks to the recent mild weather. The daffodils are blooming, the bees are buzzing and there seem to be Seven Spot Ladybirds everywhere. As you can see, the ladybirds in particular have quickly got into the swing of things. 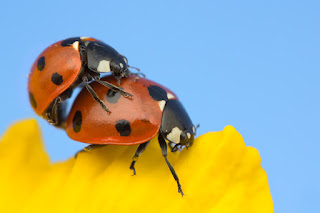 These images were taken with a Canon 60mm macro lens using a mixture of flash and natural light. In each case I angled the perch (a daffodil flower and a daffodil leaf) so that the backdrop was provided by the deep blue sky. 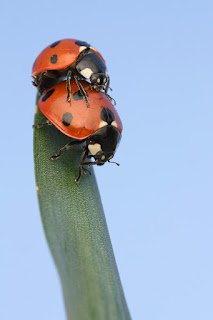 I'm very pleased to have joined the 'Meet Your Neighbours' photographic initiative created and led by Niall Benvie and Clay Bolt. The project aims to celebrate local biodiversity by creating a team of photographers around the world to photograph the wide variety of species on each of their doorsteps. All images have to be taken in the same distinctive style - with a white background created by using a field studio (on location). This not only means the images are instantly recognisable as belonging to the project but this style of imagery also celebrates the beauty and diversity of species by photographing them in isolation from their surroundings.

Photographers contributing to the project either work closely with a local wildlife organisation who utilise the images to further their cause, or they contribute stock images on a profit sharing basis to a Meet Your Neighbours collection held by stock agency Nature Picture Library. I'll be doing the latter and I've just signed a contract with Nature Picture Library.

For futher information about the project please visit the Meet Your Neighbours website. You can also find project updates on the project's Facebook page.

I'll be honest and say I didn't immediately fall in love with the style of photography when I first started to see it a couple of years ago or more. But having read the project's aims the style of imagery started to make sense. Further conversations and emails from Niall and Clay only convinced me further that this project was a great way to encourage people to appreciate their local wildlife. As Niall puts it "A brilliantly-lit white background removes the context, encouraging appreciation of the subject as an individual rather than a species. Their own form constitutes the composition. Seen this way, animals and plants we thought we knew reveal another side of themselves, encourage a second glance, perhaps even renewed interest"

At this stage I'm still refining my techniques before the insect season starts in earnest. But a few insects are now appearing and allowing me to practice on them. In due course I'll be photographing a mixture of large and small insects using a variety of styles and techniques which I will explain on this blog. Watch this space over the coming months! 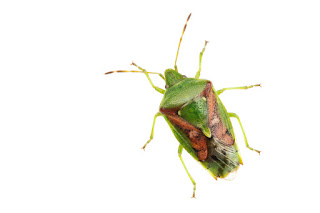 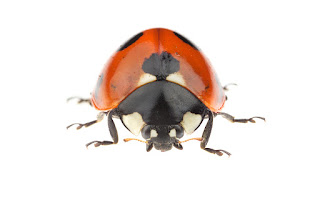 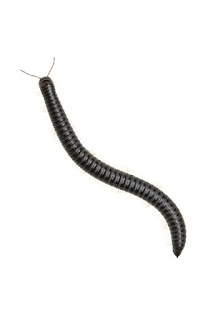 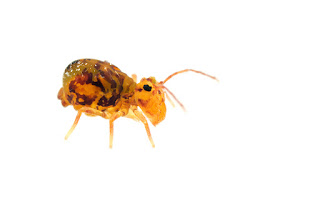 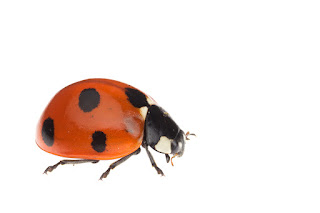 and finally a coiled Millipede looking more like an ammonite 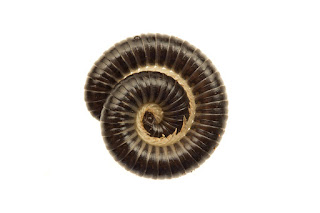 I'm pleased to say that my Confused Grasshopper image is a prize winner in this year's International Garden Photographer of the Year (IGPOTY) competition. It is one of 4 'finalists' in the Wildlife Haven section of the competition. Although 'finalist' sounds a little vague, each category has a top 3, followed by 4 finalists, followed by a number of highly commended and then commended images, so I'm quite pleased with that.


PLEASE CLICK ON IMAGES TO GO TO THE IGPOTY PAGES 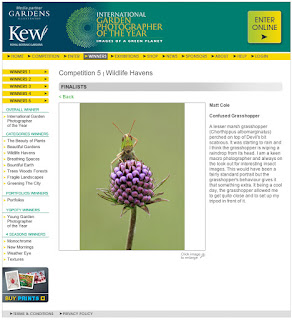 I look forward to seeing the image published in the IGPOTY book and I believe it will feature in numerous exhibitions. The competition seems to attract a reasonable degree of media attention and I've already seen my image featured in the The Telegraph.

The link below shows the other winning images in the Wildlife Havens section. 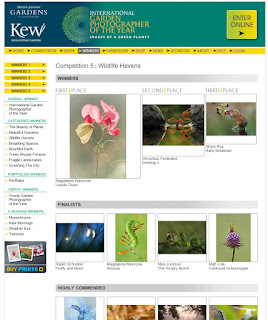