[note that a follow up post on macro flash diffusion, posted on 24th June 2015, is available here]

Many photographers rely upon flash when shooting high magnification macro and so the effective diffusion of that flash becomes crucial to the resultant image quality. I've done a lot of experimenting in recent years with different forms of diffusion and am now fairly happy with the light quality that I'm getting.

The key to successful diffusion is to make the diffuser as large as possible and to position it as close as possible to the subject. Here is my current diffusion set-up:


PLEASE CLICK ON ALL IMAGES TO VIEW LARGER VERSIONS: 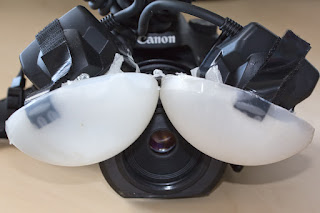 The 2 domes both started life as the front piece of a Lambency type diffuser, as shown below: 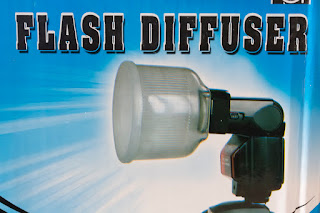 these diffusers are cheap and readily available from Ebay (search for lambency diffuser). The front piece, which curves inwards in the original diffuser, pops out and I then just cut off the rim around the edge. I then faced the issue of how to mount the 2 domes in front of the 2 flash heads. The solution was to hotglue strips of velcro to the domes, at the top and the bottom of each, and then to attach self-adhesive velcro to the top and bottom of each flash head. The following images show this more clearly. 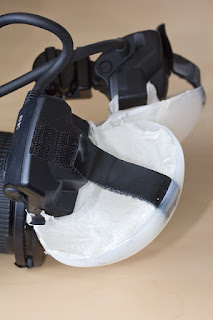 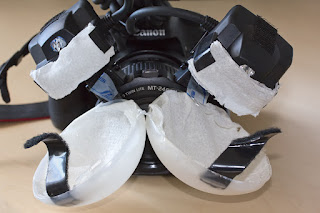 the advantage of velcro is that it is then possible to adjust each dome to move it closer, or further away, from each flash head as required. In the image directly above I have simply unhooked the 2 upper pieces of velcro to allow the domes to fall forward to show them off more clearly,

The final step in the mounting process was to drill a small hole in the inner edge of each dome and to feed through a thin white cable tie. This then holds the 2 domes together and makes the whole set-up more stable. Also, holding together the 2 domes reduces the extent to which the diffuser produces 2 distinct reflections.

While using the 2 domes alone provides reasonable diffusion, it was still possible to see hotspots from the 2 flash heads on reflective surfaces. I therefore covered each flash head with regular kitchen roll and also lined each dome with kitchen roll. This extra diffusion removed all hot spots resulting in nice even light.

I currently raise one flash head on a Hama hotshoe, as shown below, with the aim of allowing one flash head to provide light directly from above. If I'm honest, it doesn't make a huge amount of difference. 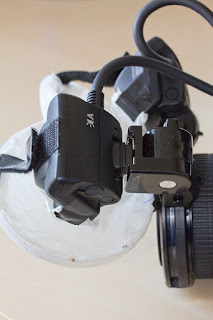 Here are a few example images. The first 2 are highly reflective insects and hence provide a good test of diffusion. In my opinion the light looks evenly spread and reasonably natural looking. 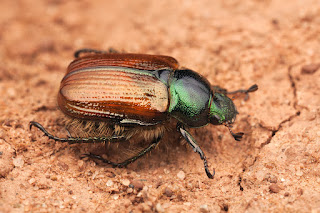 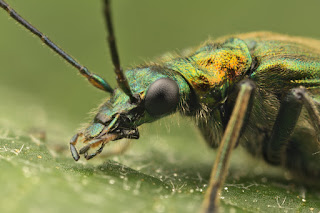 On a less reflective insect, the light could almost pass as natural light. The hoverfly image below was taken using flash alone, with no ambient light (i.e. the camera settings were such that if the flash didn't fire the image would have been pure black): 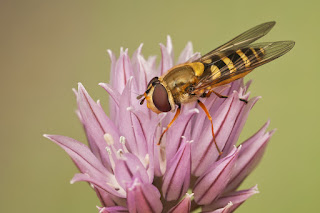 Diffusing a regular flashgun such as a Canon Speedlite 580 EX II:

I found a very effective way to diffuser a regular flashgun was again to use a Lambency diffuser. The first thing I did was to line the outside of each diffuser with silver kitchen foil to prevent light loss and to hold this down with black insulation tape. This also makes the diffuser look smarter. The image below shows the diffuser with the front dome removed. 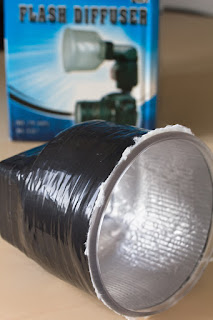 I then replace the front dome and cover the front with kitchen towel, held down around the edges with black tape as shown below. 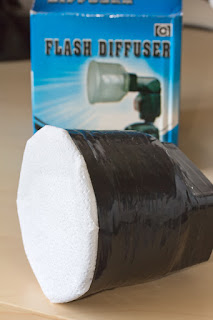 The diffuser is then finished. However, it is very important not to position the flashgun on the camera's hotshoe (as shown in the picture on the diffuser box above) as it will be too far from the subject. Instead, it is necessary to use a side bracket, ideally with a ball head, which will allow the flashgun to be angled over the subject. One option is the Hakuba LH1 bracket (again, look on Ebay) although it is a little flimsy and so not ideal for heavier flashguns. The image below shows a 580EX II Speedlite on a Hakuba LH1 bracket with an earlier prototype diffuser, but gives some idea of how the diffuser should be positioned. 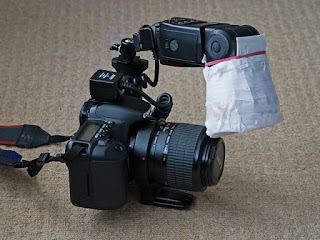 Here is an example of a very reflective Seven Spot Ladybird photographed using the Lambency-based diffuser: 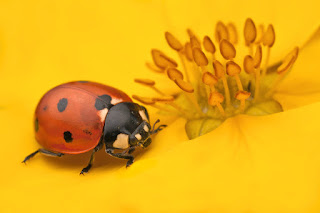 Please comment below if you have found the above useful, if you would like more information or if you have any other thoughts or queries.