I'm not sure 'building' is the right word for a pond...digging maybe? Anyway, I've been busy this summer trying to whip my garden into shape as it's been neglected in favour of house renovations since we moved in in early 2016. One garden feature I have always wanted was a pond and my kids are finally at the age when I can trust them not to fall head first into it, in theory, so I thought I'd give it a go this summer.

My garden is reasonably large, albeit square and fairly featureless until recently, but I decided I only had room for a fairly small pond. I wanted a simple, natural looking wildlife pond so no fish or electric filters. So one June morning I set to work. The following are progress shots typically taken hurriedly with my phone so the quality isn't great.

2nd June: I decided on where I wanted the pond and made a rough 'kidney' shape with an electric extension lead (all I could lay my hands on!) 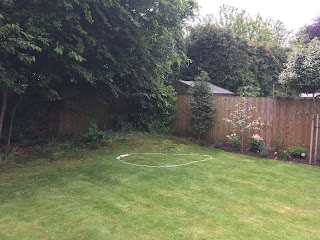 I then started digging... 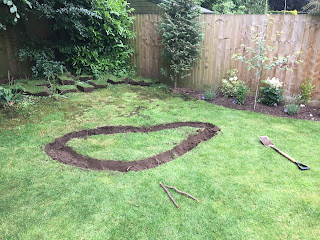 after a while I had removed all of the turf 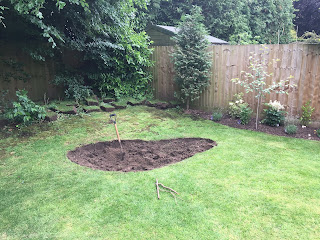 and I then dug terraces to allow me to place pond plants. The deepest part of the pond is approx 60cm deep 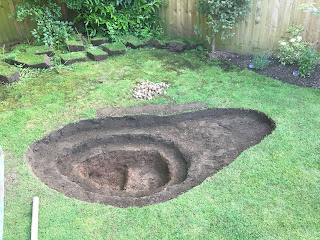 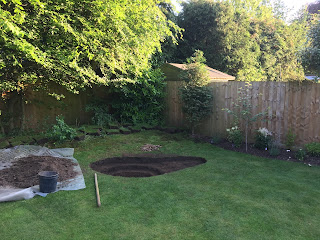 3rd June: the next day I bought a UPVC pond liner, laid it in position and filled with water. Ideally I would have used rain water but this wasn't an option. One of the main challenges I faced was how to hide the edges of the liner to make the pond look as natural as possible. I decided the lift all of the turf around the edges of the pond and to insert the edge of the liner underneath it. In the photo below you can see how the turf has all been cut and lifted. This worked reasonably well although I still wasn't happy with how much liner was visible beneath the turf. 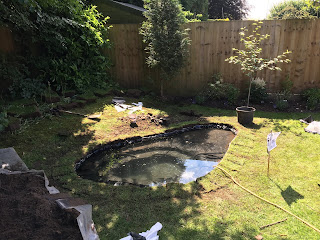 4th June: The following day I bought a selection of pond plants and added some stones and rocks to one end to create a shallow end of the pond and an area in which animals can escape the pond 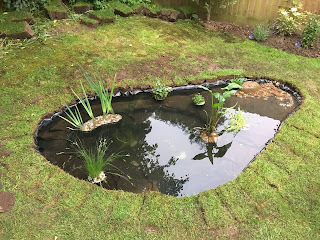 16th June: A couple of weeks later things are looking a bit more established. I've added some lily pads and more stones and rocks that I scavenged from around the garden. Many of the smaller stones were in the soil that I removed for the pond. I've also planted a wildflower mix directly behind the pond to try to add to the natural feel of this part of the garden. 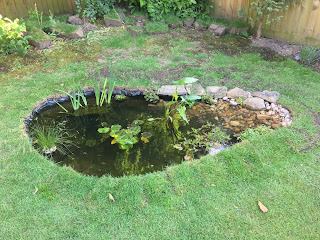 30th June: Another couple of weeks and things are looking even more established. I had to ensure that I kept the turf around the pond well watered in the hot weather as some of it was sitting on top of the pond liner and hence was prone to drying out. 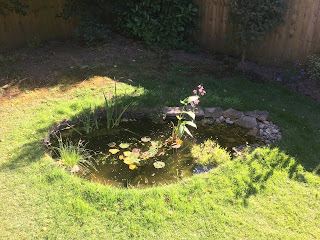 8th July: I still wasn't happy with how much of the pond liner was visible beneath the turf and so I decided to lift the turf again and to bring it forward a few inches so that it sloped over the edge of the visible pond liner and, in places, touched the pond water. My thinking was this will not only make the pond look more natural but will also keep the turf damp. I then added some soil in the cavity behind the turf and added some grass seed to it. In my view this has worked really well and it's really starting to look natural and established only a little over a month after the pond was started. 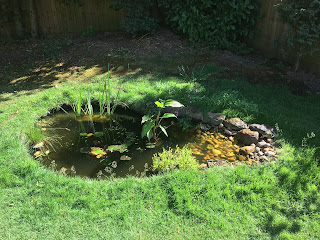 15th August: Fast forward to today and I've now added a seating area behind the pond. The plants are all very established as are the wild flowers behind the pond. I'm really pleased with how it has developed and can't quite believe the transformation in two and a half months. 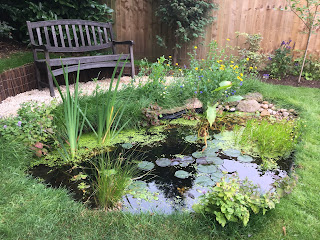 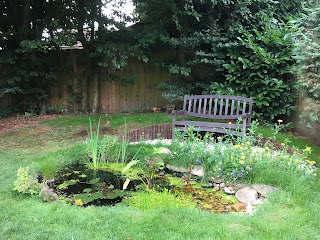 I haven't seen much by way of insect life in the pond but I'm really pleased to have seen a number of frogs. They're quite evasive at the moment but a tiny one did pose for me last night in semi-darkness allowing me to take the photo below. It's nothing special but it's significant as it's the first image I've taken of my new pondlife! 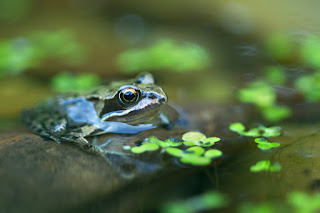