As regular visitors to this blog will know, one of my favourite styles of photography is wideangle macro. This year I found a good number of Large Red Damselflies at a local nature reserve and so decided to try to photograph them with the Laowa 15mm macro lens.

Using the Laowa 15mm lens requires a certain amount of preparation and planning. First, I had to take a flashgun of some sort as small subjects are always so close to the lens that they are in deep shadow (Large Red Damselflies are only approximately 30-35mm in length). I decided to take the Laowa KX-800 manual-only twin flash with diffusers. Second, I wanted to choose a day with a blue sky as I think that always looks far nicer than a grey or white sky. Once on site, I had to find a viewpoint that looked attractive through the viewfinder and showed the damselfly's natural environment. This isn't as easy as it sounds as the 15mm focal length provides a very wide field of view and unattractive elements will often creep into frame. Finally, I had to find a co-operative damselfly that would allow me to move the lens to within 1-2cm (literally) of it. The cool weather and relatively early start helped in this regard.

Having done all of that the next challenge is to get the exposure right. The Laowa 15mm has no auto-aperture control so the aperture has to be selected manually on the lens (as opposed to via the camera's controls) and the image you see through the viewfinder is the stopped down image rather than the wide open aperture that modern lenses allow you to look through. As a result, when the lens is stopped down the viewfinder (and liveview) is very dark. The flash also takes a lot of adjustment. I like to take images at a variety of apertures but being manual only the KX-800 requires you to increase the flash output at small apertures and reduce it at larger apertures.

Having done all of that I took a selection of images. I think my favourite is the one below. Although the aperture is not recorded in the EXIF data, I think this was taken at around f16. 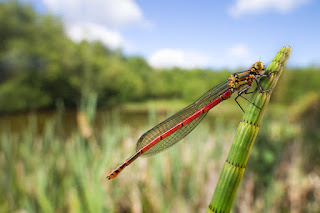 Choosing the right amount of background detail is never easy but, for me, the above is about right.

The image below was stopped down a bit more - somewhere between f22 and f32 and has more detail in the background: 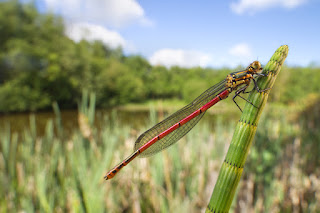 while the next one was taken at around f8: 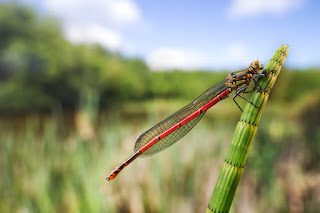 In order to illustrate how essential the flash is, the following image shows what happens when the flash doesn't fire! 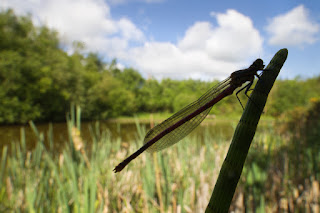 and here's the equivalent image when the flash did fire (this was taken at f32): 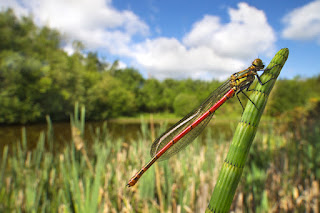 Finally, here's an image showing a Large Red Damselfly emerging from its aquatic nymph stage. This was taken with a Sigma 150mm macro lens: 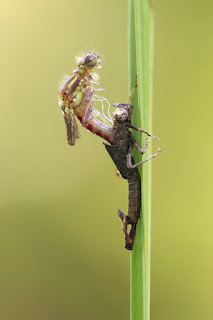 the contrast between the adult damselfly in the wideangle images and the aquatic nymph from which it emerges is remarkable. The newly emerged adult quickly expands its wings and slowly, over a few hours, its adult colours develop.
Posted by Matt Cole at 12:14 No comments: