Just a short post containing a couple of recent images of Blue-Tailed Damselflies.

The first shows a mating pair (in a so-called 'mating wheel'), with the male on the right hand side and the attractive pink/purple coloured female on the left. This image was taken with my Canon 60mm macro lens as my Sigma 150 was being repaired at the time. The shorter focal length of the Canon lens meant it was a struggle to get such a clean background, the 150mm of the Sigma really helps in this regard. But there is no problem with the image quality from the Canon lens, it produces pin-sharp images. 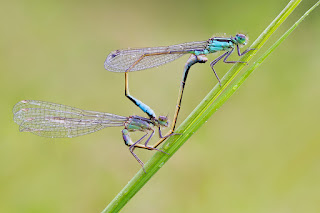 The second image is of a male Blue-Tailed Damselfly and was taken with my Sigma 150 lens a week or two before it broke. 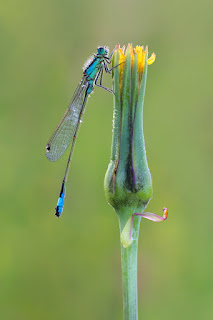 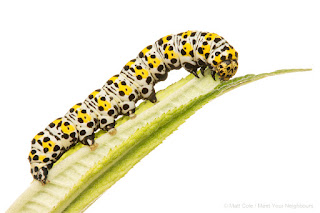 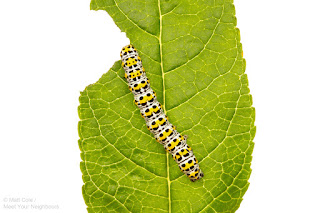 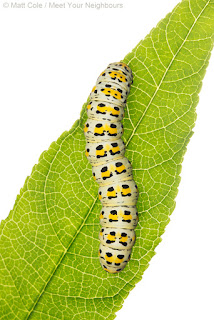 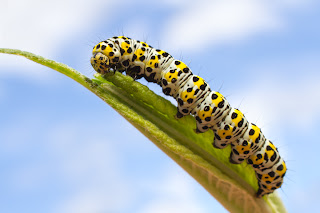 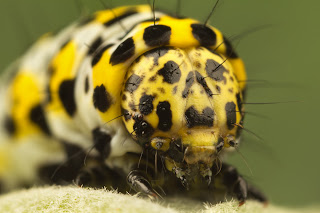 I recently had the opportunity to photograph this small and rather cute jumping spider (Sitticus pubescens) as it clambered around some pink flowers in my garden.

Jumping spiders can be very difficult to photograph as they are continually on the move. This one was a little more co-operative and did at least pause for a second or two now and again allowing me to get the images below. 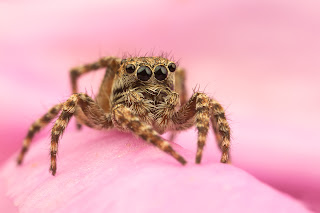 I cropped a little off the top of this next one as I thought it better suited the shape of the spider. 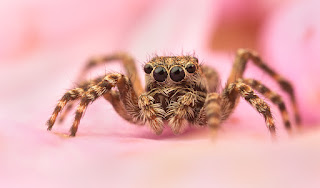 In between the almost incessant rain this summer there has been the occasional, but rather brief, spell of sunshine. During two of these spells I decided to visit a local site that is normally reliable for Common Blue butterflies. Given that the sun was out I knew it would be difficult to take the classic wings closed, clean-background images of these butterflies, which does require them to be cool and co-operative. Instead, my aim was to take some more natural looking images of them in their natural environment. I also hoped to get some images of them with their brilliant blue wings open, contrasting nicely with their yellow Bird's Foot Trefoil foodplant.

On each visit I spotted several Common Blues flitting around the Bird's Foot Trefoil flowers almost immediately. After observing them for a while it became clear that the males were very flighty and not keen on me getting too close. They were also very territorial and would defend their patch from other males. The females on the other hand were not territorial and seemed happy to flutter randomly around a large area, and they also seemed much more tolerant of my presence.

A shot I was particularly keen to get was a reasonably wideangle image of a Common Blue in its natural setting with some blue sky in the background. Such as shot is not easy because the Tokina 35mm macro lens does require you to get very close to the subject, also I had to get down very low (I was actually lying on my stomach!). Also, the relatively wide angle of view means that lots of foliage inevitably gets into view and can look rather messy. Of course, the alternative would be to shoot in cooler conditions which might allow me to arrange the butterfly's perch in a more photogenic manner, but then of course I wouldn't get the blue sky. Basically, if the sun is out then these butterflies are on the wing and not amenable to being coaxed into position! Nature photography is all about trade-offs.

Anyway, after much perseverance and a great many shots that I wasn't happy with, I managed the shot below of a female Common Blue. Although it's not a classic macro (close-up) image, and perhaps not for everyone, I must admit I am pleased with this one. I like the colours, particularly the blue sky, I like the fact it is a female Common Blue as the females do tend to have the more attractive markings on the underside. And I like the fact it is an image of a butterfly very much in its natural environment. 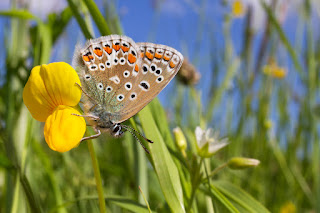 To photograph one with its wings open showing the lovely blue colour I had to find a male which meant drawing upon the extra reach of my Sigma 150mm lens (this was before it broke - it is currently being fixed by Sigma by the way). The shot below was my favourite, and shows a male Common Blue in amongst the Bird's Foot Trefoil. 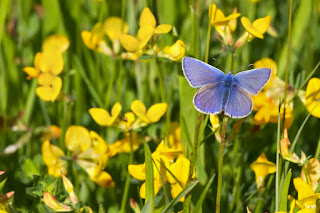 I did also manage one or two more typical macro images when the conditions were a bit cooler. First, a female on a buttercup; 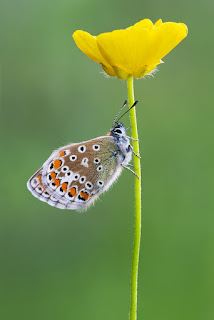 and secondly, a male on Bird's Foot Trefoil; 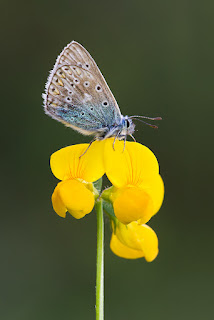 I suppose the moral of the story is that we have to tailor our photography to suit the conditions. Aim for images of butterflies with their wings open when the sun is out, but take a longer lens as you may not get close to them. If you can get close, then think about wideangle images with blue sky in the background. When it's cooler, butterflies are unlikely to have their wings open but will typically be more co-operative (and more difficult to find!).
Posted by Matt Cole at 12:15 No comments:

I consider Banded Demoiselle damselflies to be one of the UK's most attractive insects and I always enjoy photographing them despite already having quite a few Banded Demoiselle images. At the very end of May I enjoyed a session in their company with the images below being my favourites.

The first image is a little different to the norm because of the fly that landed on this male Banded Demoiselle as I was photographing him. The fly wandered around the demoiselle's wing for a minute or two before eventually flying off. What's more surprising is the complete lack of reaction from the demoiselle. It didn't even twitch! 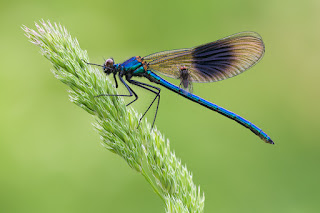 Here's a more traditional shot of the female Banded Demoiselle; 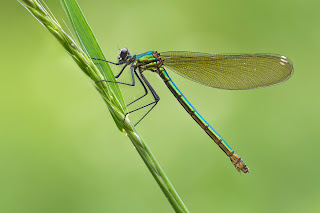 and a closer view (a separate image rather than a crop from the above): 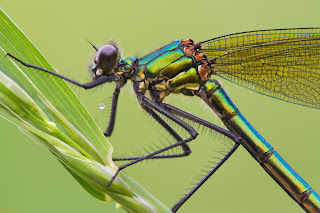 and finally, an image of the male without the fly (since I know some consider the top image to be ruined by the fly!); 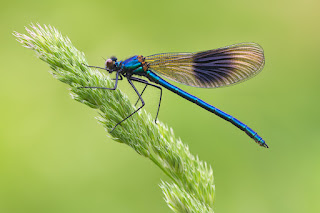 In my recent post about the emergence of Four-Spotted Chaser dragonflies I mentioned that I also took a number of 'wideangle' images of the actual emergence. These were taken with my Tokina 35mm macro lens (this lens was also discussed in a recent post) which is a great lens for showing insects in their environment.


The sequence starts just as the dragonfly emerges from the exuvia: 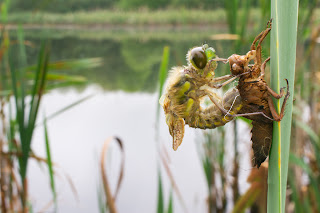 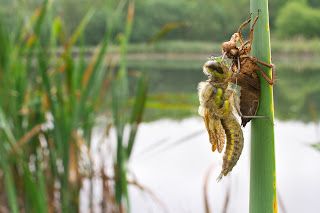 its wings quickly begin to expand: 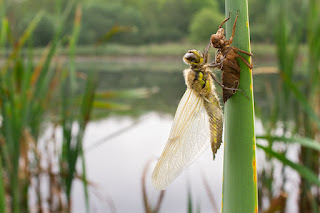 after an hour or so its wings have fully expanded and the colour and patterning on the thorax and abdomen are now almost fully developed. 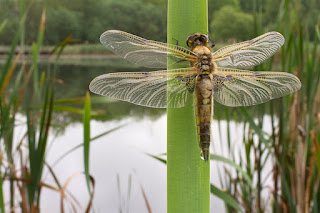 That's the end of what is a quite remarkable transformation. In many ways it's mind blowing just how this adult dragonfly has developed from the aquatic nymph.  The complexity of the wing structure, as shown in the image above, is itself astonishing and all the more so when you consider that these wings were tightly folded within the aquatic nymph!

All images taken with a Canon 7D and Tokina 35mm macro lens.
Posted by Matt Cole at 11:47 5 comments: