What camera equipment do I use?

'What equipment do you use?' is perhaps the most common photography question that I am asked. Those unfamiliar with photography are most interested in what camera I use (and, yes, I have been a recipient of the old classic comment beloved by all photographers 'wow, you must have a great camera!'). Those more familiar with photography realise that the camera is far less important than the lenses and hence tend to ask about the latter. Questions about flash are also quite common. 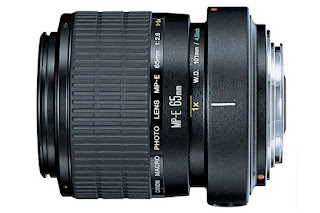 The slightly glib answer I could give to questions about my photography equipment is that it is the photographer that creates the image and not the equipment. However, that isn't entirely true. Equipment alone cannot create a great wildlife image but having the right tools for the job certainly helps. Since I don't tend to say a great deal about equipment on this blog or elsewhere I thought I would outline here the various bodies, lenses and other bits of kit that I currently use for macro photography.


As I've already indicated, for macro photography I consider the camera body to be far less important than the lens. Macro doesn't really require fast auto focus, rapid frames per second, high ISO performance and many other features of top end cameras (though, on occasions, all of these do come in handy). For many years I have therefore used Canon 60D and 7D bodies and, until recently, felt no need to replace them. Some months ago, however, I sold my 7D and replaced it with a used 1D mkIV which, I realise, seemingly contradicts what I have just said about not needing a top end camera! On occasions I was wishing I had better ISO performance and also felt that the 1.3 crop sensor would come in handy when using the MP-E 65mm lens giving me a more useful magnification range. I also felt some of the other features would come in handy with non-macro photography (plus I got a good deal!).

The Olympus is a micro four thirds camera and has the benefits of being smaller and more lightweight than DSLRs. The smaller sensor also provides greater depth of field (for an equivalent field of view) which is also useful for macro photography. The following post provides some of my thoughts on this camera (from an article in Wild Planet Photo Magazine).

The MP-E 65mm is a specialist macro lens and provides a magnification range of 1x to 5x. It's therefore the lens that I use for all high magnification work.

The Sigma 150mm is the old non-stabilised version but it's still a great lens. The longer focal length provides a long working distance and also helps to separate the subject from the background.

The Canon 60mm tends to be used as a replacement for the MP-E 65mm when I'm trying to photograph an insect that is just a bit too large to fit into frame with the MP-E. I recently photographed Bee Flies using the my MP-E (on my Canon 60D) and the MT-24 flash but the long proboscis meant I couldn't comfortably fit them in frame. I quickly grabbed my Canon 60mm and the problem was solved (see here). That said, a problem I do have with the Canon 60mm is that it is an EF-S lens and won't physically fit on the 1D mkIV. I'm therefore considering swapping it for a used Tamron 60mm which will work on the 1D mkIV (even though technically it's also meant to be for APS-C sized sensors) as well as the 60D.

Finally, and as you may have guessed, the Olympus 60mm macro lens is used with the OM-D E-M1.

One thing you may notice from this list of lenses is the inclusion of less well known manufacturers in the form of Tokina and Laowa (and, perhaps soon,Tamron). Many photographers stick to Canon/Nikon/Olympus perhaps due to a degree of snobbery but also due to a belief that other manufacturers produce inferior lenses. For macro photography at least, I would strongly disagree.   All of the lenses on this list are excellent and the prime lenses in particular are pin sharp. I wouldn't consider swapping the Canon 60mm for the Tamron 60mm, for instance, unless I knew that it would produce equivalent results.


I use the MT-24 EX for the vast majority of my flash images (diffused as shown here) with the 420 Speedlite occasionally used as a slave. The Laowa KX-800 is a simple to use, manual-only, flash (i.e. no ETTL) and is a useful accompaniment to the Laowa 15mm lens.


I'm sure I occasionally use other bits of kit as well but these are the 4 other items that I would struggle to manage without. The Wimberley Plamp is very useful for holding foliage steady when photographing something perched on that foliage. The people at Wimberley kindly sent me the Plamp II and some other related bits of kit (see here on the Wimberley website) at the back end of last summer so I'm looking forward to testing that out this year.

On more than one occasion a photo magazine has asked me to name the one bit of kit or the one lens that I couldn't manage without. That's always a tricky question to answer. A slightly easier question is, if I ever had to dramatically streamline my photography kit which bits would I hold onto? The crucial bits of kit, which would allow me to take 95% of the macro images that I would like to take, would be; a Canon camera body, the MP-E65mm, the Sigma 150, the Tokina 35mm and the MT-24 flash. Oh, and a tripod, tripod head and a Plamp. Really, the rest are luxuries that I could fairly easily manage without if I had to!

I've always been intrigued by the Bee Fly (Bombylius major) given its unusual, bee-like appearance and impressive long proboscis. My intrigue has only been heightened by the fact that I see bee flies very rarely. In fact, despite my long standing interest in insects and macro photography, prior to this year I had only ever seen them on one occasion. This was a few years ago in a family member's garden in Essex. For some reason I just never saw bee flies in my own garden or at local nature reserves.

In January 2016 I moved house just a few doors up (13 to be precise!) from my previous house and the selection of insects that I found in my new garden was, not surprisingly, very similar to that found in my old garden. However, imagine my surprise when I spotted a bee fly in my new garden during the warm weather earlier this month.  In fact, during this warm spell I saw several and at one point counted 4 individuals sunning themselves on my fence. Since then the temperature has dropped considerably and I've seen only a fleeting glimpse of a single individual.

I'm left wondering if there have always been bee flies around here - including in my old garden, though this seems unlikely given how avidly I scoured the garden each spring looking for bees and other insects. Or maybe they have always lived in the gardens surrounding my new house and stayed very local - though I didn't see any last spring. Or maybe they are new to the area? I suppose time will tell if I will see some each spring from now on.

Anyway, although they are very skittish I did manage a few images when the temperature cooled late afternoon/early evening and they became more approachable.

This first image shows a Dark-Edged Bee Fly (Bombylius major) that paused for a few moments to clean its proboscis. 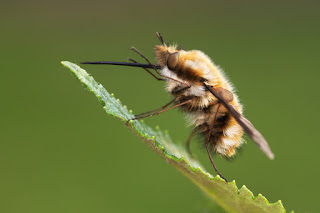 The next two images show an individual feeding on Grape Hyacinths 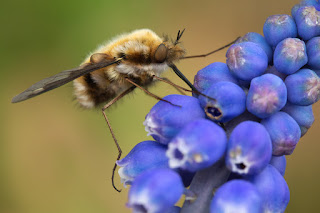 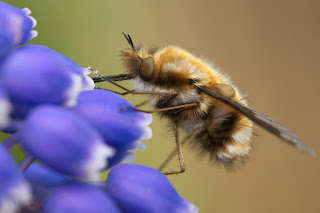 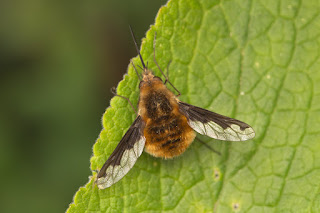 Apologies for the lack of posts in recent months. I am slowly getting back into the saddle and new posts will be appearing soon.

In the meantime I have updated 2 of the most read posts on this site: First, the 'Macro Photography Hints and Tips' article and second my guide to 'Wideangle Macro'.