In early summer, particularly May and June, I am always on the lookout for damselflies and dragonflies that are in the process of transforming from their aquatic nymph stage into their adult form. It's a remarkable transformation, on a par with that from a caterpillar to a butterfly, and one I never tire of watching.

On this particular day back in June, an early morning visit to one of my local reserves had provided little by way of photo opportunities and I was just about to leave when I noticed this Four-Spotted Chaser dragonfly, midway through its transformation. Unfortunately, I was already running late and wasn't able to hang around to see the full emergence of the dragonfly, instead having to make do with a few shots of it halfway out of its exuvia.

All images taken with a Canon 7D and Sigma 150mm macro lens. 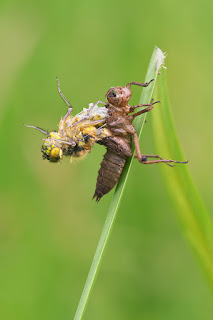 I decided to return early the following morning and surprisingly found the fully formed adult dragonfly very close to where I had left it. I don't know for definite that it was the same individual but it seems very likely. The previous day had been very cool and it would appear that the dragonfly hadn't warmed up sufficiently to take to the air. It was very co-operative and allowed me to photograph it on two different perches with the buttercups next to the water's edge forming a nice yellow backdrop. 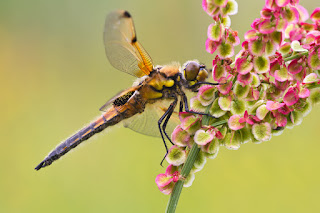 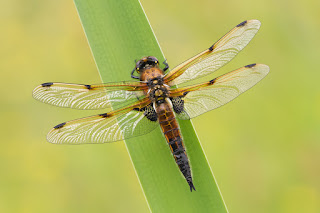 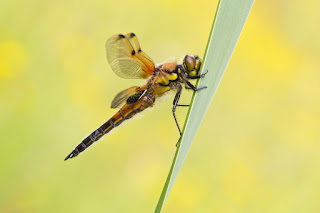 It's always a pleasure to be able to photograph a stunning dragonfly such as this but somehow this occasion seemed all the more pleasurable having been present at its birth the day before! Eventually the sun came out and after some wing vibrations it flew off into some reeds further out over the water.
Posted by Matt Cole at 07:42 2 comments:

I have always been intrigued by the idea of insects trapped in amber many millions of years ago but had never actually seen any until recently. I now have a couple of small pieces, one containing a tiny midge and the other a slightly larger Caddis Fly. Both have been checked for authenticity and have been confirmed to date from the Eocene period, approximately 50 million years ago. I don't know whether it's just me, but the idea that I can see an insect that was flying around 50 million years ago almost blows my mind.

Here are a few images. The midge is tiny, approximately 2-3mm in length so is heavily magnified.

PLEASE CLICK ON ALL IMAGES TO VIEW LARGER VERSIONS
In this image of the midge you can actually see its compound eye; and in this one, you can see the feathery antennae, just like you see on midges today; 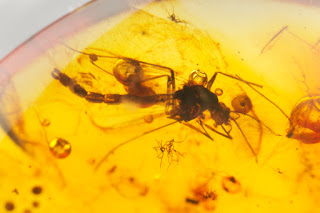 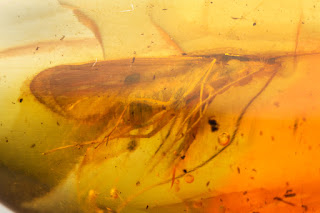 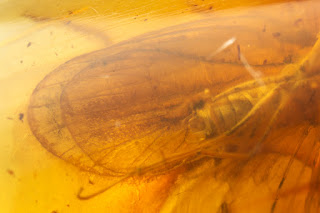 Recently in my garden a small movement on a leaf caught my eye. On closer inspection I could see what appeared to be a very small clump of moss and other debris moving around. As ever, I grabbed my camera to take a closer look and realised that I was looking at some sort of larva which had placed debris on its back, presumably as a means of camouflaging itself. Following a bit of research, and drawing on the brains of the folk at the website Wild About Britain, it became clear that this was a Lacewing larva. Apparently Lacewing larvae feed on aphids and regularly camouflage themselves in this way in order to hide from the ants which often protect groups of aphids (the ants feed on the sugary honeydew produced by the aphids).

This individual was very small, only around 5mm in length, and didn't hang around for long so I only managed to take a few frames. I used my MP-E 65mm macro lens. 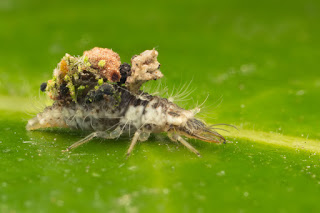 I've had a few images in print over the last month or so. Firstly, a Small Copper image in BBC Wildlife magazine. Having been a reader of this magazine since I was a teenager, I'm always particularly happy when it publishes my images. This one appears in the August issue. 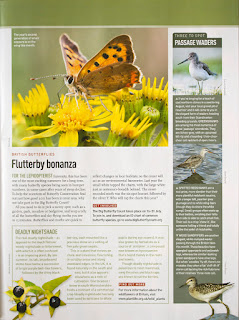 Several years ago, in fact back in 2008 I believe, I sent a few images to what was then Digital SLR User magazine to see if they wanted to feature any in their Readers' Gallery. A few weeks ago the editor of Digital SLR User's new incarnation Digital SLR Magazine got in touch with me to see if they could publish one! The result is this double page spread of a Common Wasp in the August issue. 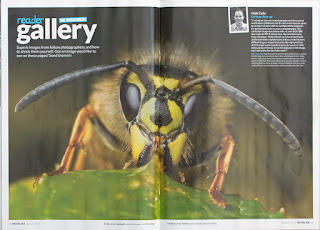 Finally, the Wildlife Trusts do a fantastic job protecting British wildlife and they regularly use my images in their various regional magazines, in their national magazine, on their website and in promotional material. The images below appear in The Grebe, the magazine of the Cheshire Wildlife Trust (my images are the silhouetted Large Red Damselfly and 3 of the smaller images (the Brown Hawker, the Banded Demoiselle and the Common Darter)). 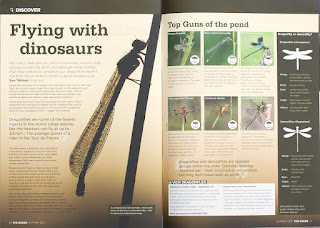 One of my local wildlife sites is particularly reliable for Banded Demoiselle damselflies, surely one of the most attractive of all British dragonflies and damselflies. Earlier in the summer I spent several early mornings there hoping to find them while it was still cool and while they were still co-operative. I didn't always succeed, particularly with the females which seemed to be more scarce than the males, but did come away with one or two shots that I was quite pleased with. I have others to come that I've yet to process.


PLEASE CLICK ON ALL IMAGES TO VIEW LARGER VERSIONS
Firstly, here's a male; 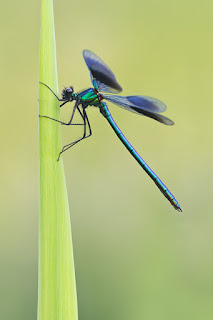 I was keen to get an image showing their wing markings more effectively which requires them to be photographed from above. This is a challenge as the aerial view tends to mean that grass etc on the ground clutters up the background while the wings are rarely held flat and so pose a real challenge for depth of field. The answer is to focus stack - to take several frames with different parts of the image in focus and with the background taken using a large aperture (which reduces depth of field). These can then be merged in Photoshop. The image below was taken in this manner; 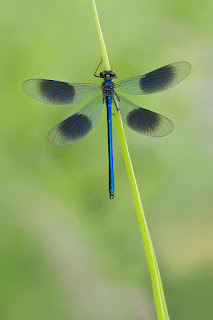 Finally, an image of a female: 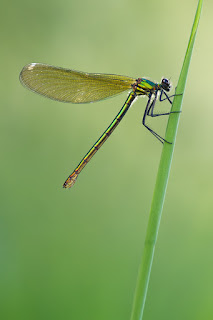 Welcome to my blog

Well, I've been thinking about it for a while but I've finally got around to setting up a blog. I intend to use it to publish and discuss some of my latest images and to provide other bits of news relating to my photography. I may also provide some occasional thoughts and musings on wildlife or nature-related issues.