Well, it's now the end of the year and it seems an appropriate time for me to reflect upon my photography over the past 12 months.

A few observations I could make are that I don't think I have ever taken so few non-macro images (e.g. birds and mammals) as I have this year. To some extent this was deliberate but it was also circumstantial as well. For instance, the mild weather this autumn and winter has certainly limited the opportunities for photographing small birds at feeding stations and in my garden. Another observation I could make is that I normally take a greater number of fungi images but, again, the dry autumn meant there was very little fungi around this year compared to previous years. Finally, I think I've had a greater number of images published this year than in previous years though sadly I had no success in the major competitions despite having one or two shortlisted.

So what are my plans for next year? I don't have anything too specific planned but I do intend to continue to experiment and to try different styles. Watch this space for more details....

Having looked back over this year's images I thought I would draw up a list of my favourite 10 images taken in 2011. This is not an easy task as often an image will mean a lot to me for reasons that wouldn't be obvious to anyone else viewing the image. For instance, I may appreciate an image because I had been trying to capture a certain behaviour for some time or because the image was one that I had pre-planned. Nevertheless, the following images, in no particular order, would be those that I'm probably most proud of.

Black Ant (Lasius niger) drinking on a foxglove: I find these tiny black ants (3-5mm in length) very difficult to photograph due to their small size and the fact that they are always on the move. I like the fact that I managed to photograph this one side-on and I also like the striking pink backdrop. 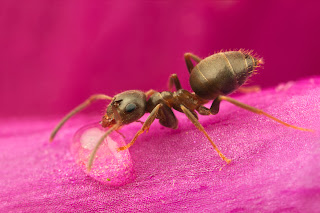 Four-Spotted Chaser Dragonfly: The reason I like this image is partly the combination of the perch and background colours (it's a field of buttercups) but also because the day before I took this image I was lucky enough to observe this dragonfly emerge from its larval form. 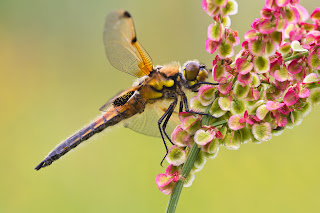 A mating pair of Syrphus ribesii hoverflies: It's always nice to capture insect behaviour and I particularly like the fact that the female is having a drink...! 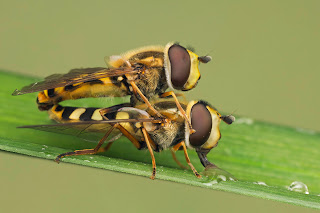 Glowing Snail: I like this image of sunlight shining through a small snail mainly because it's a little different. 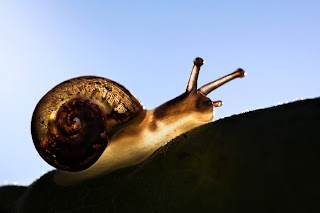 A Large Red Damselfly emerging from its larval stage: The process through which dragonflies and damselflies transform from their aquatic nymphal stage into the adult stage never ceases to amaze me. I like the position of the damselfly in this image as it tries to push its way free of the exuvia. 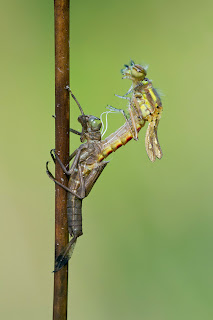 A Seven-Spot Ladybird feeding on an Aphid: I had been trying to capture this behaviour for a while and was very pleased to capture a series of detailed images showing ladybirds eating aphids. 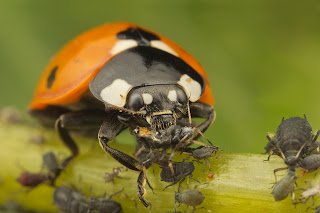 Black and White Woodlouse: This image was taken back in March but it was only very recently that I decided to have a go at producing a menacing looking black and white version. I'm sure it's not to everyone's tastes but I'm quite pleased with how it turned out and I like the fact that it's a fairly unusual image. 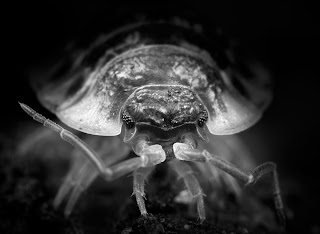 Horse Fly (or Cleg Fly): I've been trying to get a decent image of a Horse Fly's eyes for some time but Horse Flies can be very skittish. I was pleased with the composition of this one. 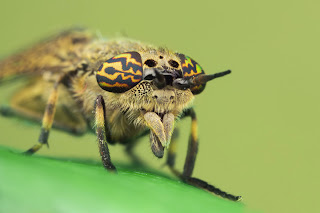 Fly Agaric wideangle: As I've mentioned in previous posts, I'm a big fan of 'wideangle macro' style images. They're difficult to do well, and this one is far from perfect, but I was still quite pleased with how it came out. 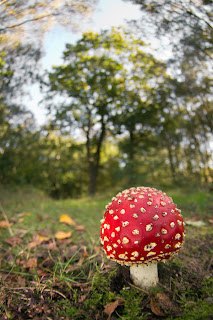 Black Ant trying to 'milk' an aphid: This behaviour is very difficult to capture for the same reasons as I've given for the Black Ant image above. Again, I like the fact that I've managed to capture the ant and aphid side-on in the second or two for which they paused. Ideally a globule of honeydew would be present although the image would then tell a different story to this image which shows an increasingly frustrated ant resorting to clambering onto the aphid in an attempt to get it to secrete some honeydew. 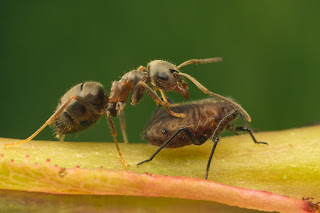 So there you have it, an entirely personal and subjective selection of some of my favourite images of the year. I'm looking forward to next year already...
Posted by Matt Cole at 08:46 10 comments:


26 new images have been added to my main website. Some have already been featured within various recent blogposts but a number are new, including those below.

The images can all be found in the Latest Images gallery and in the appropriate insect, bird, mammal and fungi galleries. 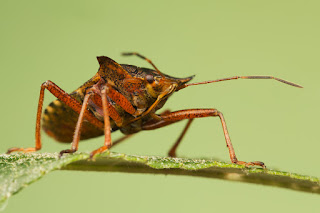 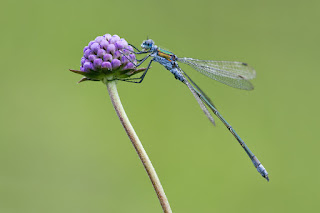 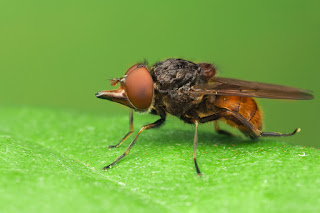 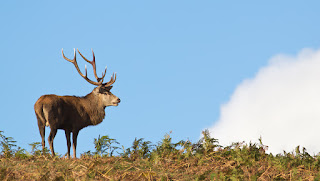 I would like to take this opportunity to thank the readers of this blog for their interest in the blog and in my photography more generally. Since starting the blog towards the end of August visitor numbers have increased steadily and the number of pageloads has now passed 3,700. I intend to develop the blog further in 2012 and to maintain a regular flow of varied posts.

In the meantime I would like to wish you all a happy Christmas and a peaceful and prosperous new year. 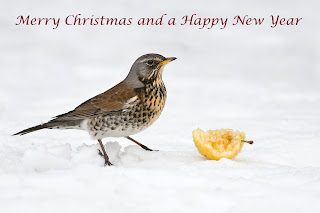 It occurred to me recently that you see very few black and white macro images. To some extent this may reflect the fact that brightly coloured insects, which are often the subject of choice for macro photographers, may not lend themselves to being photographed in black and white. Instead, black and white photography is normally considered to be an effective way to introduce mood to an image, typically landscape images, or to emphasise textures for wildlife subjects such as elephants. But having given some more thought to this issue I came to the conclusion that some macro subjects would be well suited to black and white photography.

Earlier this year I photographed some Common Rough Woodlice and was struck by the fact that up-close they look rather menacing and almost warrior-like. They are predominantly grey, highly textured and tend to lurk in damp, dark places. All of which made me think that it should be possible to create almost film noir type images of these menacing looking creatures emerging from the darkness. The results can be seen below.

Do these images work? Well, you can be the judge of that. I imagine they will divide opinion but it's nice to try something different from time-to-time. 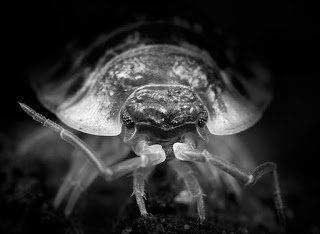 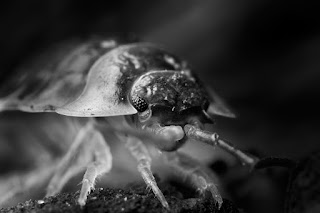 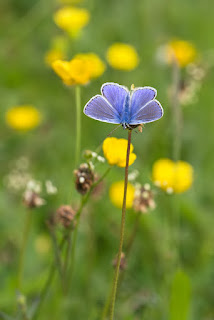 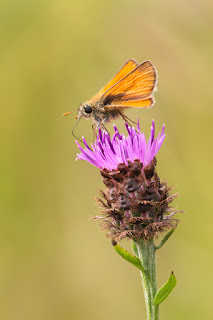 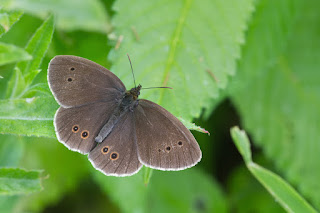 The mild weather here in the midlands this autumn and winter has meant greater insect activity than would normally be expected. Only a few days ago I saw a Bluebottle fly and Greenbottles were also still around until fairly recently. These images are probably my last insect images to be taken this year.

Although I don't think either of these species would win any popularity contests, the Greenbottles in particular are actually quite attractive close-up. Or maybe it's just me...! 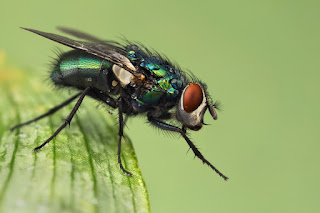 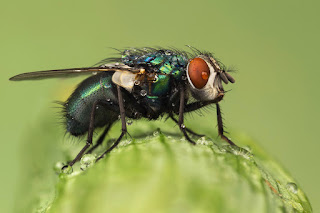 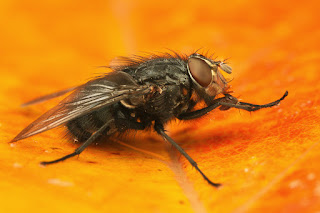 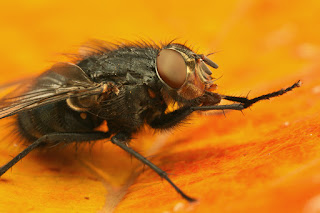 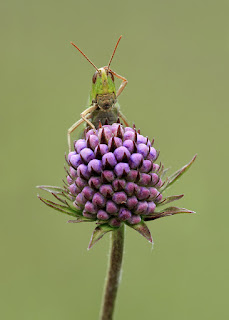 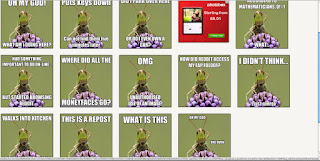