The Venus lens company  - a small Chinese lens manufacturer - recently launched a unique lens, the Laowa 15mm f4 wideangle macro. What is special about this lens is that it is a true macro lens capable of 1:1 or lifesize reproduction yet has a very short focal length and hence provides a very wideangle perspective. As far as I am aware, the next shortest focal length true macro lenses on the market are the Sony 30mm macro and the Tokina 35mm macro. Venus very kindly sent me a copy of their new lens to review and I have been putting it through its paces over the last 2-3 weeks. Here are my initial thoughts (I may well update this article over the coming weeks and months).

There is no doubt that this is an excellent lens that is capable of producing images that no other commercially available lens can produce. However, like all specialist lenses it is a challenging lens to use, particularly at higher magnifications.

The build quality is excellent and the lens feels reassuringly solid. However, it is manual focus only and, perhaps more importantly, there is no auto aperture control. What does this mean? It means that when you look through the viewfinder you look through the stopped down lens. Modern lenses normally allow you to look through the wide open lens when focussing and framing which provides a much brighter image. Instead the viewfinder becomes very dark when using, say, f16 or f22 on the Laowa 15mm. In addition, you cannot set the aperture via the camera but only via the lens.

The other challenge with this lens is the proximity of the subject to the lens at, or close to, 1:1 reproduction. At 1:1 the working distance is 5mm, yes that’s 5mm! This means that a very docile subject is needed as the lens will practically be touching it but it also means the lens will cast a shadow on the subject. Flash therefore becomes almost essential when using this lens at higher magnifications. So far, I have experimented with using a single diffused flash gun on a side bracket with the diffuser resting on the rim of the lens. If carefully positioned it can light the subject above and from one side but if not carefully positioned the flash head will creep into the field of view and/or will cause lens flare. I have recently received the Venus macro twin flash (KX800) and will provide my thoughts on that flash in due course. I haven’t been able to use my Canon MT-24EX twin flash with this lens as I am not able to attach the flash heads to the rim of this lens. It is possible to buy flexible arms which attach to the tripod screw on the base of the camera and each holds one of the MT-24’s flash heads, but this isn’t something I’ve tried.

Given the lack of working distance and the lighting difficulties described above you may well be wondering if the lens can really be used at or close to 1:1 reproduction. Well, it can as long as great care is taken, not only to find a docile subject and to carefully set up the flash but also to pay greater attention to the background. At higher magnifications the background loses detail even when the lens is stopped down. If the subject is surrounded by grass or foliage it may appear as an out of focus mess. However, if there is a more distant view in the background some of this landscape detail should still be discernible in the final image. There is less of a need to include distant landscape in the background at lower magnifications as more detail will be captured in nearby grass and foliage thereby still potentially providing a nice habitat image.

Nevertheless, here are a couple of images taken at, or very close to, 1:1 reproduction. Both images were taken with an APS-C sensor body and have not been cropped. The first is a Harlequin ladybird larva, approximately 8-10mm in length, on a leaf in my garden. 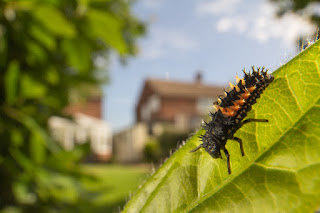 The second image is of a Common Red Soldier Beetle, approximately 10mm in length. 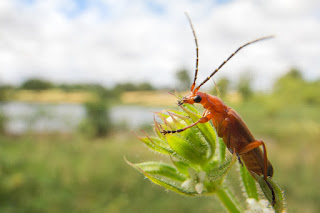 In both images enough detail is retained in the background to show the subject in its environment, despite the high magnification.  However both images were tricky to take mainly due to the darkness of the subject (because of the stopped down viewfinder and because the lens was casting a shadow on the subject). As with most of my macro photography, I preset the manual focus and then move the lens (handheld) until the subject is in focus. But the darkness of the subject made this difficult. I’m hoping the modelling lamp from the KX800 twin flash will make this easier.

I have also taken a number of other images at lower magnifications which were generally more straightforward. Here is an early morning dew-covered Blue-Tailed Damselfly: 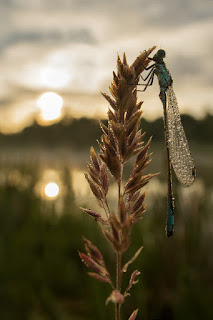 and a small Brown-Lipped Snail in its waterside habitat: 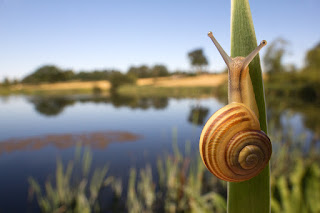 and finally a Small Skipper butterfly warming up in the early morning sun: 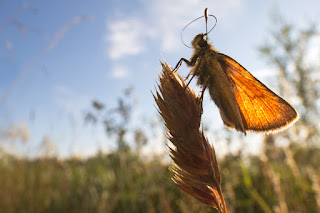 EDIT: see also this post for a selection of sample images taken with this lens.

Finally, I’ve said little about image quality. Optically, the lens is excellent in my opinion. It is capable of taking very sharp images and, in my experience, any soft images are not the fault of the lens’ optics but stem from the difficulty in achieving precise focus due to the difficulties described above. There is a small degree of barrel distortion as you would expect from a 15mm lens. I have yet to experiment with the lens’ shift facility but this should help to correct perspective distortion in images of buildings etc. Chromatic aberration (purple fringing) is almost always present to some degree in wideangle lenses particularly at higher magnifications and particularly in high contrast areas (e.g. an insect’s dark antennae against a white sky). I don’t consider the chromatic aberration to be excessive and it can generally be corrected in post-processing.

In summary, the Laowa 15mm f4 wideangle macro lens is an excellent lens that can produce unique images. It is well made but the lack of auto aperture control and the minimal working distance at higher magnifications provide some challenges. However, with practice it is possible to produce interesting wideangle macro images of insects, flowers, fungi etc in their natural environment. The greater magnification of this lens gives it the edge over fisheye lenses, particularly for smaller subjects, and the 15mm focal length means it can provide a much wider field of view than the Tokina 35mm macro. The Laowa 15mm will therefore find a permanent place in my kit bag.

Other photographers' views of this lens:

Ross covers 'Essential Kit' for close-up photography, a section specifically on shooting butterflies and another section on pondlife. My sections cover wide-angle close-ups and the use of flash in close-ups. 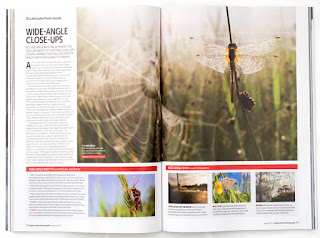 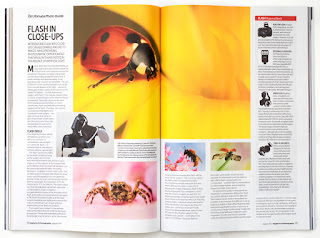