A style of photography that I'm particularly keen on is high magnification, natural light macro. You see images taken in this manner rarely, mainly because it is very difficult to do. Most high magnification images have been lit entirely by flash in order to freeze movement (of both the camera and the subject). This year I've been experimenting quite a lot with mixed light macro, where I use flash to illuminate the subject but allow natural light to illuminate the background. In my opinion this can look more attractive than the black backgrounds which fully flash lit images tend to have (unless the photographer has been careful to put a leaf or something similar in the background close to the subject). On a sunny day this technique will allow you to have blue sky in the background which I always think adds something to an image.

I recently had a session photographing ladybirds that were feeding on Goldenrod and decided to use a mixture of flash and natural light. To make things more interesting I wanted to try to photograph a ladybird as it unfolded its wings in that split second before take-off. Not easy. I did notice that sometimes when a ladybird reached the top of the Goldenrod flower, if it was in full sun and nice and warm, it would take-off. The problem was that I didn't want the ladybird in full sun as I wanted it to be shaded by my camera so that it was illuminated by the the diffused flash, rather than the undiffused sun. I was therefore trying to allow the sun to warm the ladybird but as soon as it looked like it might take off I had to move the camera to shade the ladybird. This technique met with partial success and provided the 2 images below. 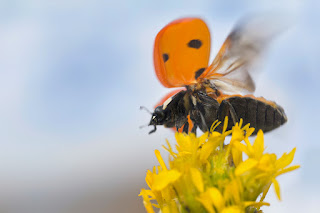 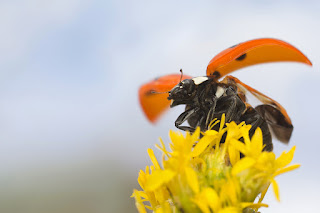 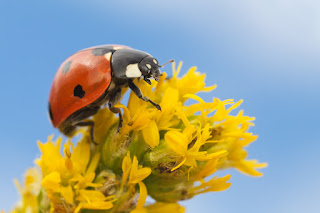