There were lots of ladybirds in my garden this summer with the majority being the familiar Seven Spot Ladybird. However, I also found Pine, Two-Spot, Fourteen-Spot, Larch and the increasingly common Harlequin Ladybird. The latter only arrived in the UK in 2004 and its rapid spread has led to concerns that it will out-compete some of the indigenous species. Apparently numbers of several species have fallen since the arrival of the Harlequin, with the Two-Spot ladybird suffering one of the biggest declines.

Since the Harlequin is now relatively common in my part of the world, I was able to observe and photograph 3 of the 4 stages within its lifecycle. The 4 stages are egg, larva, pupa and adult and it is only the eggs that I have yet to see. 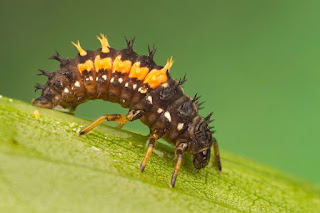 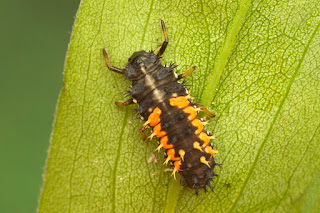 After approximately 3 weeks the larva anchors itself to a leaf and forms a pupa, as shown below; 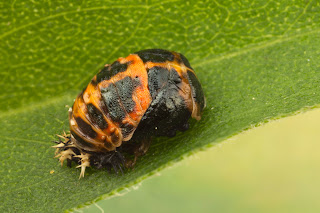 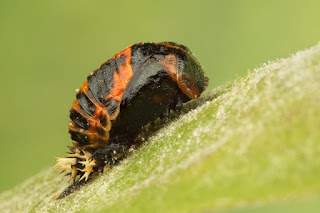 After approximately one week the adult ladybird emerges. They are generally pale to begin with but their colours slowly start to develop. 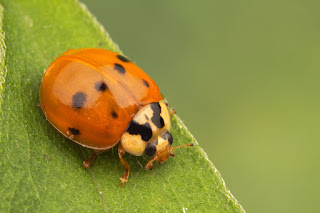 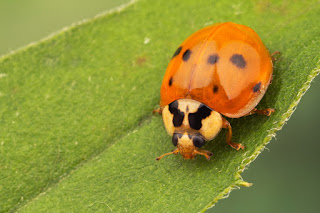 Like many species of ladybird, the Harlequin feeds predominantly on aphids and so, at face value, their spread would seem to be good news for gardeners. However, this natural pest control service becomes far more vulnerable if it is performed by only one ladybird rather than by a number of different species. If anything were to affect Harlequin numbers then the natural check on aphid numbers would no longer be there. The only good news here is that Harlequins don't appear to pose a threat to the Seven-Spot Ladybird at least.


All images were taken with the Canon MP-E 65mm macro lens and a heavily diffused Canon MT-24EX twin flash (and 7D or 60D bodies).