When I stumble across a photogenic subject I will normally take a number of different images with the same lens in order to achieve different compositions. In addition, I will often use more than one lens to capture the subject in a number of very different styles.

My starting point is often my Sigma 150mm macro which is great for classic style macro images in which the subject is isolated from the background. I will then often see if it is possible to take a more wideangle style of image to capture the subject within its environment, typically with either my Tokina 35mm macro or my Tokina 10-17mm fisheye. Finally, if the subject lends itself to it, I will use my Canon MP-E 65mm macro to take some above life size images.

The following pair of images provide a good example of how different lenses can produce very different images. The images are of a trio of Amethyst Deceiver fungi. The image on the left was taken with my Tokina 10-17mm fisheye, at 17mm and f22. The fungi were approximately 4cm tall and so to ensure that they were this large in the frame the lens was literally almost touching them. The wide field of view of the fisheye lens has ensured that there is lots of detail in the background, helped of course by the small aperture. In contrast, the image on the right was taken with my Sigma 150mm macro lens which has a very narrow field of view. I also took this at f8 to reduce the detail in the background still further. To ensure that both the stems and the front of the 'bonnets' were sharp I had to stack 2 images. 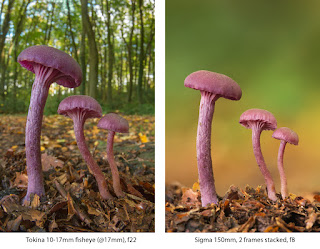 I should stress that my intention here is not to provide a direct comparison of the different fields of view of the 2 lenses. If that were my intention I would have taken each image at the same aperture and not stacked the right hand image. Instead, my aim is simply to show the different image styles that are possible with different lenses. It would not be possible to take the left hand image with the Sigma lens (even at f22) not the right hand image with the Tokina lens (even at f8).

The following 2 images provide another example of the effect of different lenses. The first image, of a newly emerged Four-Spotted Chaser dragonfly, was taken with my Tokina 35mm macro lens (at f13), with the obvious aim of trying to capture the dragonfly within its aquatic environment.  The second image was taken with my Sigma 150mm macro (at f7.1) and, due to the sun starting to peep through, shooting into the light slightly. Again, two very different styles of image. 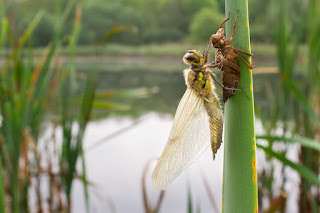 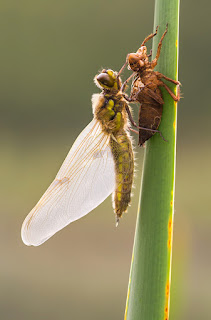