A Green Woodpecker and Some Deer

Every now and again I like to photograph wildlife subjects that are slightly larger than my usual six-legged friends, particularly at this time of year when the number of insects starts to drop dramatically. A complete lack of fungi at my usual haunts due to the recent dry weather has reduced my macro options further still and so a recent photographic trip with my friend and fellow keen photographer Eric Weight (www.ericweight.co.uk) resulted in a visit to Bradgate Park to view the deer rut.

I must admit I normally avoid Bradgate Park at this time of year like the plague. It is usually crawling with photographers, all trying to photograph the deer and often getting in each other's way in the process. Not really my idea of wildlife photography. But it seems most go early in the morning, all trying to capture those atmospheric images of a red deer stag emerging from the mist. By arriving a little later (due to an ill-fated attempt to first photograph some fungi!) we seemed to avoid the worst of the crowds and only saw a handful of photographers all day.

The highlight of the day for me was not actually the deer (great though they were) but a trio of beautiful Green Woodpeckers who were working their way around a field full of large ants nests. The long grass made a shooting angle difficult but the image below was about the best of the bunch. I must admit I like this shot, not least because it shows the bird feeding naturally and very much in its natural environment. 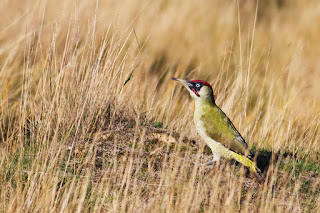 Of course, I managed a few deer shots as well, though the challenge with deer images is to avoid them looking about as interesting as a cow or a horse stood in a field - which is why many aim for the early morning light to give the images some atmosphere. In the absence of such light I had to make do with nice natural settings, good poses and a vivid blue sky. The image below is probably my favourite image of the Red Deer stags; 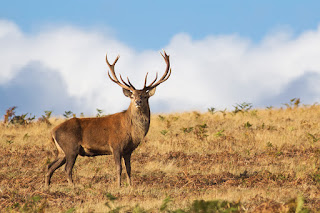 while this image of two calves is probably my favourite image of the Fallow Deer that also frequent Bradgate; 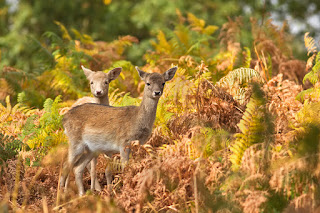