I mentioned in a previous post that I find the behaviour of ants fascinating. One particular aspect of their behaviour that interests me is their relationship with aphids. The two species have a symbiotic relationship - the ants protect the aphids from predators and in return secrete globules of sugary honeydew from their abdomens which the ants lap up.

Whenever I find a group of aphids I look out for the ants, which are never far away, and try to capture the interactions between them. This presents a number of challenges. The ants in the images below are Black Ants (Lasius niger) and are approximately 4-5mm in length. The aphids are even smaller, so at this level of magnification depth of field is miniscule, approximately 0.3mm (yes that's 0.3 of a millimetre!) . However, what makes the task most difficult is the fact that the ants rarely stand still. They are constantly on the go, clambering over the aphids and continually stroking them with their antennae to encourage them to release globules of honeydew.

I photograph high magnification subjects such as this handheld and light the image entirely with heavily diffused flash to remove motion blur. Given the extremely shallow depth of field and the 'dynamic' nature of the subject matter the use of a tripod would not be practical. Instead, I grip the leaf or stem that the ants are on in my left hand and rest the end of the lens on that left hand for stability. The lens and subject then move as one. The short working distance of the MP-E 65mm macro lens (around 3 or 4cm at this magnification) obviously lends itself to this technique.

Just occasionally the ants will pause for a second allowing me to move the sliver of the frame that is in focus over the eye of the ant. I also need to try to ensure that the aphid or aphids are also within the depth of field. Perhaps not surprisingly it can take a lot of patience and I regularly suffer from aching arms and a sore hand from where the end of the lens digs in.

Unfortunately, I've had very few aphids in my garden this year and only had one attempt to capture the interaction between ants and aphids on a stay with family in Essex (and, yes, my mother-in-law did look on with much amusement as I sat on her lawn with my head on a rosebush as dusk fell around me..). The frame below was the best of the session and shows a Black Ant desperately trying to encourage an aphid on a rose bush to secrete some honeydew. The ant was repeatedly stroking the aphid from the rear with its antennae and eventually resorted to putting its front legs on the aphid's back. The ant left empty-handed after a few seconds and moved on to another aphid. 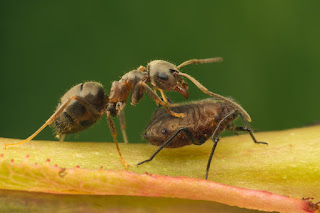 In previous years I've taken a number of images of ants and aphids. The image below was Highly Commended in the 2010 Wildlife Photographer of the Year competition and entitled (by them, not me :-)) 'The Ant Shepherd and its Little Flock': 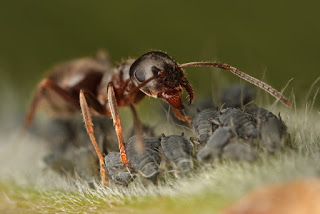 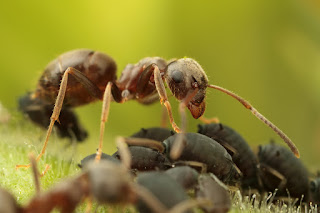 The real challenge when shooting these is to capture a drop of the honeydew in the image. This is particularly difficult because the second it appears an ant picks it up with one of its antennae and puts it in its mouth. To date I've only managed 2 images where the honeydew is visible and in focus. In the image below the ant has it in its mouth and is just about the swallow it - shame about the out of focus ant in the foreground... 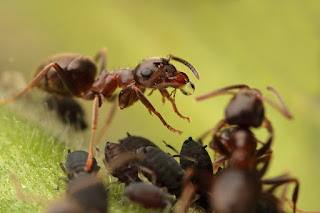 and in this one the ant is about to whisk the honeydew into its mouth with its antenna. 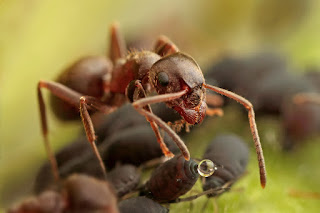 ...unfortunately, it's not the best composition. I'll no doubt try again next year.
Posted by Matt Cole at 15:19