I'm pleased to have a number of images in the new BBC Springwatch British Wildlife book, in fact 5 images in total I think. I believe FLPA, the stock agency who I supply to, secured an exclusive contract to provide images for this book so the book is packed full of images by British wildlife photographers. Here are a couple of my featured images. Firstly, my image of a black ant herding aphids; 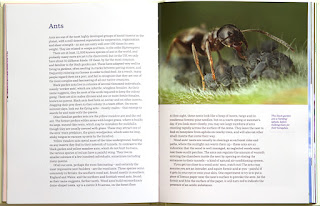 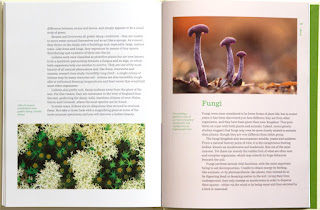 This month I was also pleased to see one of my images in Countryfile magazine as well as several of my images in Wildlife Trust publications, including my Common Blue butterfly image below; 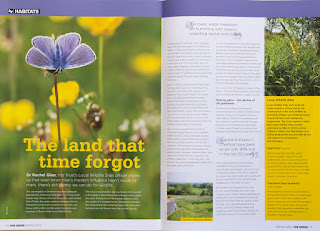 and my Confused Grasshopper image appears in Wildlife Watch, the Wildlife Trust's magazine for children. 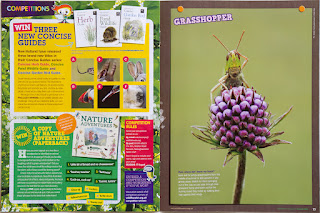 Yesterday I had the misfortune of my beloved Sigma 150mm macro lens breaking in two as I took it off my camera. Quite simply, as I twisted the lens, the rear section stayed attached to the camera and the main body of the lens came off in my hand! 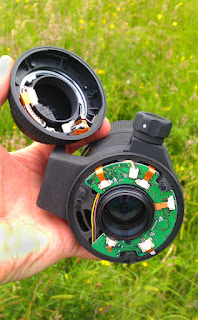 Closer inspection reveals that the rear plastic section of the lens (the bit that attaches to the camera) is held onto the main part of the lens by 3 very small screws which go through weak plastic fittings. Since the entire weight of this fairly heavy lens rests on these 3 plastic fittings, I'm actually surprised that this hasn't happened before. Any knocks to the lens are highly likely to break these fittings and I suspect they were already cracked and weakened from 6 years of heavy use. When I took off the lens yesterday it proved to be the final straw.

I've sent it to Sigma to be repaired and I'm hoping this will be reasonably straightforward. I imagine they will replace the rear section although repairing the electrical contacts (two of which snapped) might be more difficult.

I have always been a huge fan of this lens. The image quality is excellent and, until yesterday, I always thought it was fairly robust. However, when I do get the lens back I will certainly be treating it more carefully in future as this does strike me as a real design weakness.

UPDATE: Sigma repaired the lens for a charge of £98 and returned it to me within approximately 3 weeks.
Posted by Matt Cole at 12:51 No comments:

Emergence of a Four-Spotted Chaser Dragonfly

On one memorable morning last month I was fortunate enough to see three different dragonfly nymphs emerge from a local pond onto a reed and to transform themselves into adult Four-Spotted Chaser dragonflies. I normally consider myself fortunate if I witness the full transformation process once in a summer but to see it three times in the space of an hour was something else. Clearly, through a combination of judgement and pure luck I just happened to be in the right place at the right time.

As you can imagine, I took one or two images (!) including a number of wide angle images which I shall save for a later post, but here are a few taken with my Sigma 150mm macro lens.

The first couple of images show the dragonfly soon after it starts pushing its way out of the exuvia. After a while it reaches a point where it sits upside down and motionless and looks as if it is about to drop onto the ground, as shown by the right hand image. However, having observed an emergence before I knew that I just had to be patient. Sure enough, after a good few minutes collecting its strength it suddenly lifted itself upwards and within a few seconds pulled its way free of the exuvia. 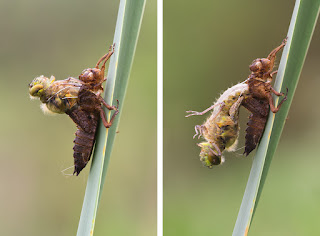 These first two images required me to get into position pretty quickly but in truth I wasn't happy with the light or the background. After a few minutes I therefore gently twisted the reed just a few degrees (I was holding it with a Plamp) which made all the difference to the background and the light, as can be seen below. 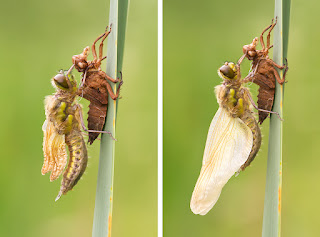 In the above 2 images the dragonfly is now free of its exuvia and remains motionless while its body and wings expand. The speed with which the wings expand is quite remarkable - these two images were taken just a few minutes apart.

After a few more minutes I tilted my camera slightly and took a landscape image: 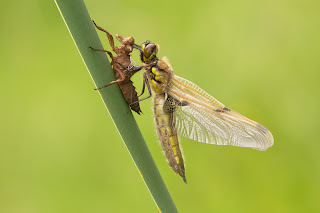 As I have mentioned, I also have a number of wideangle images of the transformation process but I'll save those for a later post.
Posted by Matt Cole at 21:56 2 comments:

I'm pleased to say that I have a 5 page macro photography guide, with a selection of my images, in the July issue of Digital SLR magazine. The article is aimed at beginners (the target audience of the magazine) and covers camera settings, how to find subjects, equipment etc. A couple of sample pages are below: 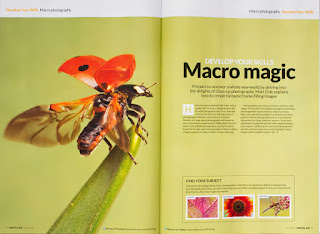 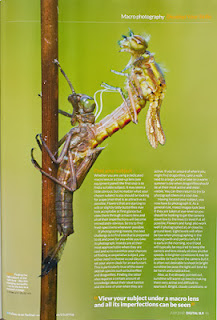 Over the years I have seen occasional images of Crab Spiders taken by other photographers and have always thought that they look like great macro subjects. I have therefore been keeping an eye out for Crab Spiders for several years but until recently I had never spotted a single one. Finally, I recently found a couple and managed to get a number of images on what, I think, are Periwinkle flowers. The species is Misumena vatia (female) and there's no doubt that they are striking macro subjects. What's even better is that they are relatively co-operative. Some spiders won't let you near them but these individuals seemed quite happy to let me get very close. If only all invertebrates were so helpful! 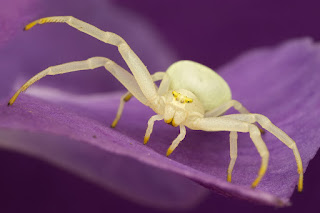 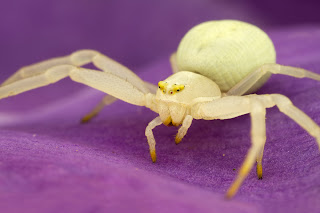 and here are a couple at higher magnification: 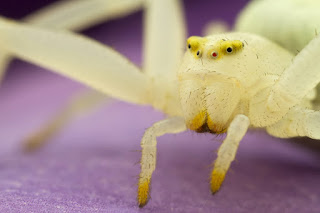 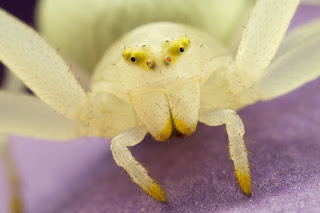 Finally, here's one with a Greenbottle Fly: 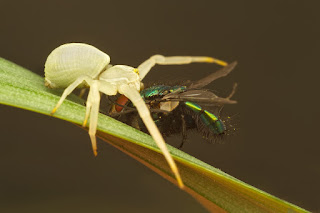 In 2011 and 2010 I visited Ryton Woods in Warwickshire in mid to late May and on both occasions I was impressed with the variety of insect life that I was able to photograph. In mid May this year I again visited Ryton Woods but was disappointed to find that the woods and butterfly meadow had the look, and feel, of mid March rather than mid May. The grass in the meadow had yet to grow and the butterflies' foodplants, such as Bird's Foot Trefoil, had yet to flower. Not surprisingly there were very few insects around. In total I saw only 4 butterflies - a single Green Hairstreak, a single Grizzled Skipper, a Small Copper disappearing into the distance and an Orange Tip, again at some distance.

However, the cool conditions did at least mean that I was able to improve my existing images of Green Hairstreaks and any shots of the Grizzled Skipper were a bonus as this was a species that I had not previously photographed. Also, the bluebells were in full bloom and were an impressive spectacle.

The Green Hairstreak appeared to be very territorial and was sticking close to an area of brambles and a patch of bluebells. I returned to this area several times during my visit and on each occasion the butterfly was perched on the brambles or actually on the bluebells. 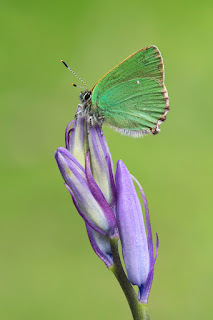 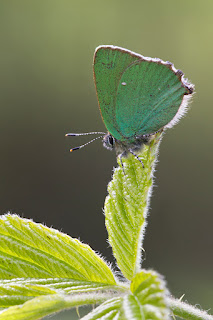 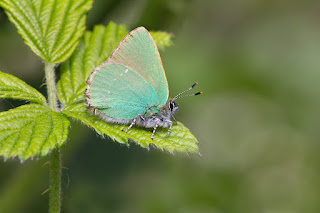 The Grizzled Skipper was quite approachable until the sun came out, at which point it would invariably take to the air. Luckily the sunny spells were few and far between and so I was able to get reasonably close to it. 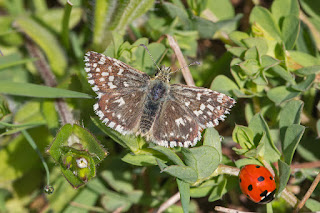 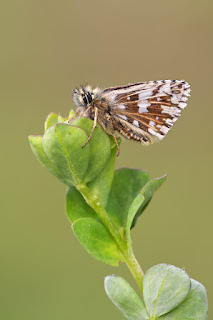 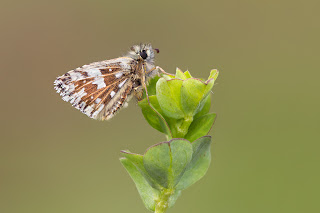 and finally, a couple of shots of the bluebells; 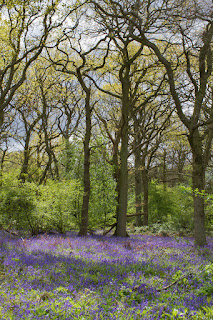 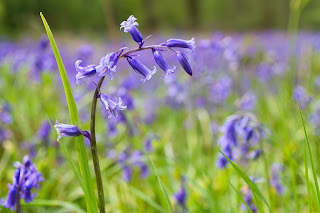 All in all, not quite the productive trip that I had hoped for but I did come away with one or two images that I was quite pleased with.
Posted by Matt Cole at 21:02 5 comments: